As a cardiovasclar exercise machine that works on both the upper and lower body parts, the Nautilus E514 elliptical trainer provides a low impact exercise using natural motions while working out. The routines are therefore easy on the joints and knees, and the unit even offers a solid support for the heels.

As the exercise machine can be programmed and adjusted to one’s preferred resistance settings, it can adapt to your level of expertise and keep you challenged as well.

16 Resistance Levels – This model of exercise machine allows you to set the resistance level that’s suitable for your particular exercise routine.
2 Programmable User Profiles – You can customize the unit’s program up to 2 different settings.
Profile Courses – This elliptical trainer presents the user with 7 pre-programmed courses for variety and motivational purposes.
Over-sized Footpads – Your feet will have a solid support for comfort and efficiency.
4 Heart Rate Monitoring Programs – This added feature makes monitoring and assessing your heart condition easier.
Transport Wheels – The unit is equipped with large caster wheels for easy mobility.
Blue Backlit Display- The blue background makes it easy to read the unit’s console. 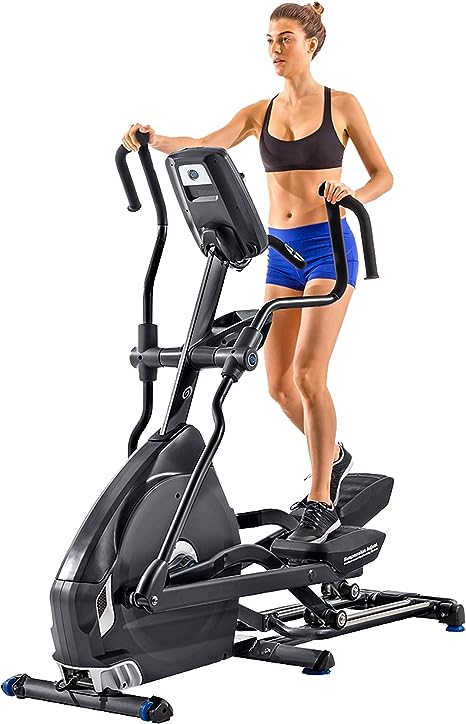 How to Assemble the Nautilus E514 Elliptical Trainer?

This model of exercise machine comes with a detailed instruction manual on how to assemble it. As the unit is comprised of many parts, it can take 2 hours or more to set the whole thing up. It would be easier if 2 people will assemble this elliptical trainer.

Once completed, the entire assembly measures 62 x 26 x 71 inches and it weighs around 165 pounds. There are caster wheels attached on the unit so as to enable its transfer from one location to another.

How to Use the Nautilus E514 Exercise Machine?

You can start using this home gym equipment as soon as the whole system is set up. If you want to start immediately, you can choose from any of the pre-programmed courses already included in the machine.

If you want to program your own preferred settings, you can also do so. You can customize 2 user profiles so that you can easily access the specific exercise routines during your workout.

This model of elliptical trainer can accommodate up to 300 pounds of body weight.

Consumers are generally pleased with the performance of the Nautilus E514 elliptical trainer, and satisfied customers are recommending the product. There are, however, a handful of unsatisfied users too.

Having a bad set of assembly instructions is a common complaint among buyers of the equipment. According to some customers, the left and right labels on the parts are quite messed up, and that it’s better to just refer at the pictures during assembly.

There are also malfunction issues associated with this model of elliptical trainer. And even if the unit is backed by warranty, there were users who were not satisfied with the Company’s customer service. There were reports of not being attended to properly by customer support and being kept in waiting for so long. So be aware of this possible scenario when purchasing the exercise machine.

Lastly, although the unit is supposed to be capable of accommodating up to 300 pounds of body weight, there were some reports of the machine swaying side by side during standard workout routines. Note that the user who reported this complaint only weighs around 280 pounds.

While the Nautilus E514 is generally considered to be a good product, there were some users who didn’t have a pleasant experience with the equipment. See the pros and cons listed below to find out about the major issues taken up by consumers themselves.

Fitness EQ – is the participant in the Amazon Services LLC Associates Program, an affiliate advertising program intended to provide a means for websites to earn advertising fees by advertising and linking to Amazon.com

As an Amazon Associate I earn from qualifying purchases