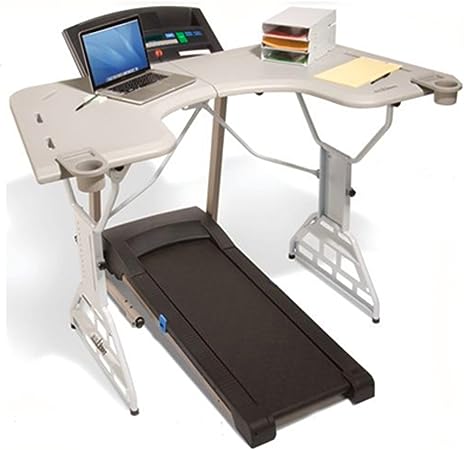 The TrekDesk treadmill desk is a workstation that can be used in conjunction with a treadmill exercise machine. The whole set up provides for functional workout equipment that you can use even while working on your computer.

The desk comes fully equipped with all the essential accessories needed for a complete office set up. It has a file folder, manuscript holder, telephone and headset stand, and even cup and utility holders.

This model of treadmill desk is designed to accommodate users with heights of 5’4” up to 6’ 4” as it has adjustable seats and levers. The tabletop itself weighs around 57 pounds, and it can carry a total weight of up to 55 pounds.

How to Assemble the TrekDesk Treadmill Desk?

A detailed instruction manual, as well as a video tutorial, comes with this model of treadmill desk. It comes with multiple parts and screws that you can easily assemble by simply following the step by step guide provided for in the manual and video.

The Trek Desk is foldable but stable and sturdy when attached to the treadmill device. In order to set up its height, you simply need to adjust the height of the supporting legs.

The main tabletop which is reinforced by steel can then be installed on the assembled frame. All the additional paraphernalia (manuscript holder, folder, phone stand, cup holder) are screwed on the main desk.

How to Use the Trek Desk?

The trekdesk is designed to fully attach to a treadmill equipment. As you now have a desk in front of you while walking slowly on the treadmill, you can still do your work on the computer even while working out.

This treadmill table attachment comes fully loaded with features that give you a complete office set up. You can place your computer, paper files, phone, and other needed office supplies on top of your desk for easy access and maximum work production. It even has utility holders so you can enjoy a cup of coffee while working and exercising.

This treadmill working desk attachment is also designed in such a way that you can easily access the control panel on your treadmill machine. You can therefore adjust its settings and monitor your progress conveniently.

Consumers are generally pleased with the performance of the TrekDesk treadmill attachment. A majority of customers found it easy to assemble the unit, reporting that it took less than an hour to set up the workstation with an already existing treadmill.

However, there were some users who found the instruction manual a little limited as there were only a few pictures included in the step by step guide. Furthermore, with the large number of screws that need to be used in the assembly, it would have been easier if these were segregated according to size and placed in different bags.

Another issue that some customers brought up is that this desk is more suitable for treadmills with side control panels. It was observed that if the control panel is located on the front side of the treadmill, the tabletop setting can somewhat block the view and access controls on the treadmill.

Although considered to be an overall useful and stable workstation, some consumers are not very pleased with the amount of space that it occupies. According to some customers, it’s too big to be placed in small rooms as the combination of treadmill and trek desk can really take over the entire area.

Reviews on the Trek Desk treadmill exposed both positive and negative feedback from consumers. Listed below are some of the points that you should keep in mind when looking out to buy the product.

Fitness EQ – is the participant in the Amazon Services LLC Associates Program, an affiliate advertising program intended to provide a means for websites to earn advertising fees by advertising and linking to Amazon.com

As an Amazon Associate I earn from qualifying purchases